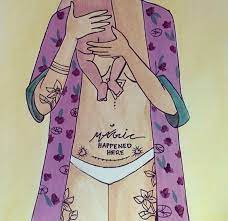 As a built-up to the twinsies birthday… let me tap in on this. APRIL is C section awareness month!!!!

I had the girls via C-Section. It was very planned. I did not want to give birth vaginally…again. I had given birth vaginally 10 months earlier and after 26 hours of labour things didn’t go well. There was negligence but there were some complications as well. So no, not everyone does C-Section because they have medical aid or because the private hospitals love money.

Also… I could have tried again- but I wasn’t ready to fight that battle of faith – if I even sense doubt or uneasiness in my heart about something, I don’t go for it. I was healing from the loss, but I was expecting. So, I left that battle for others. All I wanted was a child who was alive. Then God said – hold up… I have two coming up.

Although my C Section was planned…I ended up giving birth 2 weeks prior because of my chilled baby who decided that she was going to lie still like a lizard on a rock on a sunny day.  I was honestly, also tired of carrying close to 7kg on my belly – ha! Take them out. 36 weeks

I hated getting the needle on my spine. It’s the most uncomfortable yet scary feeling. You are told not to move or jerk because they could hurt your spine. I mean…try to imagine holding yourself from jerking while having a dream of you falling 20 storeys down. All the best!

So, the anesthesia kicked in. I couldn’t feel pain but boy I could feel EVERYTHING….the pulling, the cutting, the weight of the 2.9kg and 2.7kg and water coming off (don’t we all wish for that instant weight loss). I could hear everything as well…let’s just say my Drs seemed to have forgotten that…cause wow – the conversation!!!

Post-op was the works. I almost became a Karen to the nurses. The pain was off the charts. I asked for a higher dose of something. Anything!!!!  Apparently, breast feeding babies for the first time is painful. I don’t know cause my body seems to have transferred all the pain receptors to my belly. I felt like you could hit me with a hammer on my head and I wouldn’t feel a thing.

I am healed by the stripes lf Jesus. No infection. Speedy recovery. I muttered under the pain. This is a prayer one should make even before going under the knife. The pain was unbelievable – at this point I did not know which was worse between the post C Section pain or labour pains.

One thing I am good at is being a student. I listen, ask and do. With my first labour, I had an episiotomy – yes, another type of pain and trauma. They told me how to take care of the wound for speedy recovery and to avoid infection. I did as I was told – I was ok within 2 to 3 weeks without infection. This time around I was also told what to do. Walk as soon as possible, clean the wound twice a day, etc. I did as I was told and I was up and running in no time.

Overall, I am grateful to God for life- both mine and that of my babies. A C-Section is considered a major surgery and so many things can go wrong for both mother and child. To come out of it alive and well, is a miracle worth celebrating